MH (EkimNosnah@aol.com) was at the concert. Click here to read of his experience.

Photos from The Who Sell Out photo session by David Montgomery 1967. If you have any others please let me know.

What did Melody Maker think of Quadrophenia when it was released in 1973? Another British music newspaper, the New Musical Express, has also featured some nice Who material over the years. One was a pictorial tribute to Keith after he died.

And if you're a big fan of Keith Moon (who isn't?) follow this link for some pictures of him, as well as scans of his solo album.

If you're interested in the equipment Pete Townshend uses on stage and in the studio follow this link.

Following is one of my favorite scenes from "The Kids Are Alright" movie. The photo is from a press kit and is autographed in blue pen "To Joe - Pete Townshend." 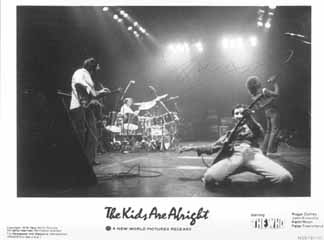 Saw my work on your site. Very Cool.
Thought you might like to have a decent jpeg of the 3-12 Sunday strip
instead of the scan from the paper.

The next set of photos are all black and white 8x10's from another press kit for "The Kids Are Alright." The first four are horizontal format scanned at 640x480 and make a nice wallpaper for your computer desktop.

The next pamphlet was included with some of the U.S. Meaty, Beaty, Big and Bouncy albums.

By popular demand here is the photo of Pete with the bloody hand ©1980 Rolling Stone Magazine.

The August 1970 issue of National Geographic had an article titled Home to the Enduring Berkshires with a photo of the Who performing at Tanglewood in 1969.

I have a small promotional card for Rotosound Strings given to me by my good friend and fellow Who collector Roland Boisjoly from the Boston area. Roland has played bass for many years and is pictured here with another pretty good bass player - this same bass player autographed this beautiful picture for him. Here's also another photo of Roland down in the tube station (at midnight?).

The next two pages are scans from a 1968 issue of "Eye" magazine that first published the lyrics to "Joker James," "Party Piece From Rael" and "Join My Gang."