I have just come across your web site and wondered if you would like some pictures of my scooter.

It has been personally signed by Roger, John and Pete. As far as I know it is the only one in the world. I am very lucky to have a friend who's uncle in law is Roger's PA. Roger has signed my cd's and record sleeves, when I got my scooter I made a flippant remark to my friend that I should get him to sign this as well!

He spoke to Roger and asked him what he thought.....he liked the idea and said that if I got the scooter ready then he would get the other to sign it as they were due to be in the studio soon. This was back in 2001. I have a friend who is a paint sprayer and between us we got the panels ready to be signed. I picked pictures and had them made into vinyl stickers, these were then mounted onto the panels. These have then had 4 coats of lacquer to seal them and then I took them to my friend.

He then gave them to Roger, who then got John and Pete to sign each panel.

Each panel has then had a further 8 coats of lacquer to seal the signatures in. This also means you cannot feel the stickers, giving a smooth feel to each panel.

I met Roger in 2000 and John in 2002 at Portsmouth. I then displayed my scooter at the Who convention in 2006. Roger turned up and I managed to get him to sit on it for a photo. The only down side was that so many people wanted to get to him that I could only just get him in and not the scooter as well ! you can only just see the seat!

Well I have attached some pictures if you want to add them to your web site that would be great.

A Vespa P200 scooter that has been customized WHO Style. 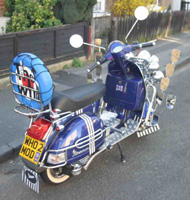